Ethernet Distance Extension
Two VC-231G converters can act as a standalone pair which is good for Ethernet distance extension over the existing telephone wires. With just one pair of AWG-24 copper wires, two Ethernet networks can be easily connected to each other with a maximum data transmission rate of 200Mbps. The telephone service can still be used while the VC-231G CO/CPE is in operation. The two solutions listed below are typical applications for the Ethernet over VDSL2 bridge. 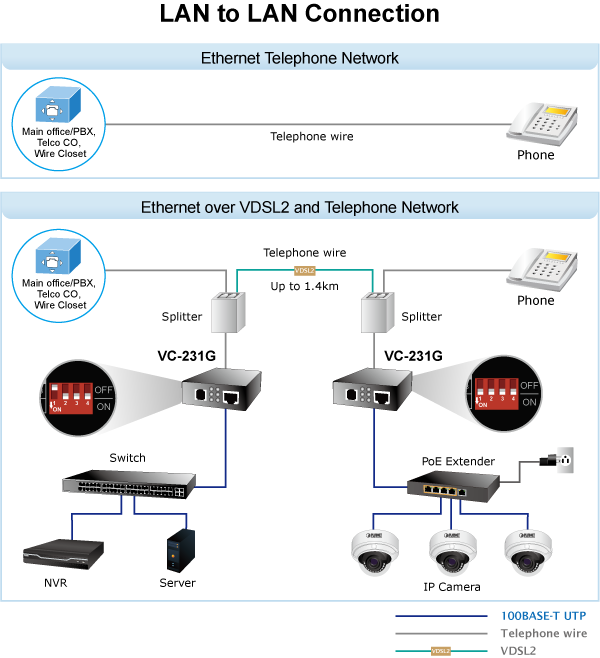 MTU/MDU/Hospitality Solution
The VC-231G is a perfect solution to quickly providing cost-effective yet high-speed network services to multi-unit buildings such as residential buildings (multi-dwelling units), commercial (multi-tenant units) buildings, hotels and hospitals. By utilizing the existing telephony infrastructure, a new network installation can be easily built, without requiring new wiring. With a transmission rate of up to 190/100Mbps (G.INP, Asym, 8dB), VoD, IP telephony and various broadband services can be easily provided. 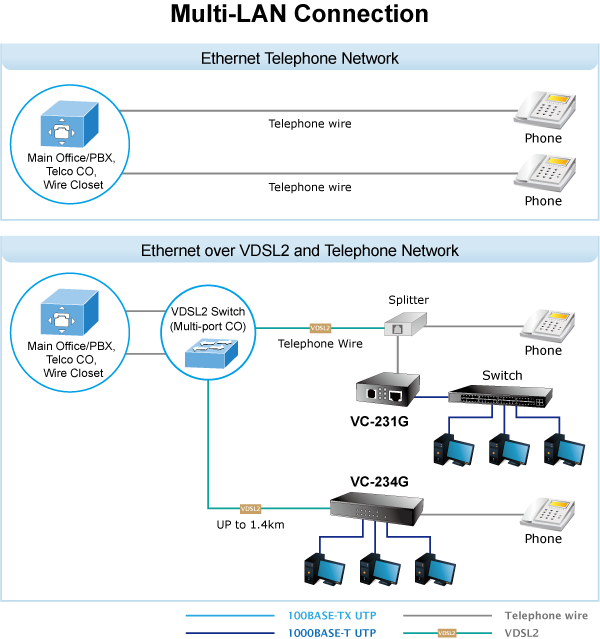 Last Mile of FTTx Deployment
The VC-231G is an ideal solution for FTTx (Fiber to the Building, Fiber to the Campus or Fiber to the Node) applications. It supports high-bandwidth VDSL2 over the existing telephone wires in the “last mile” from the ISP/telecom/service provider’s fiber node to the buildings and customers’ apartments. The 10/100/1000Mbps port of the VC-231G can be directly connected to a PC or Ethernet devices such as Ethernet switches or broadband routers. It is excellent for phone line network built under Internet because every room or house can use the existing phone line to transmit data through the Internet and the whole building can share the Internet to the wider area network at a minimum cost. 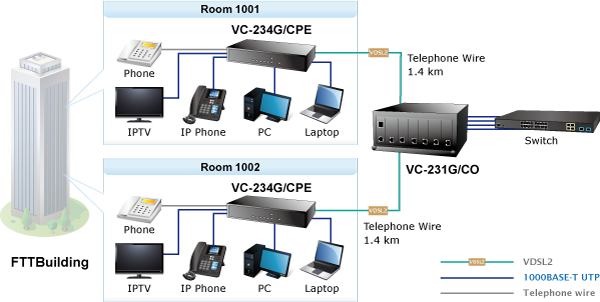 150/150Mbps Downstream/Upstream, High Performance Gigabit Ethernet over Phone Wire Solution
PLANET VC-231G, a new-generation and high-performance Gigabit Ethernet-over-VDSL2 Converter, works well with a pervasive telephone line network with a symmetric data rate of up to 150/150Mbps (G.INP, Sym, 8dB) over a distance of 300m and 22/10Mbps over a long distance of 1.4km. It is based on the two-core networking technology, Gigabit Ethernet and VDSL2 (Very-high-data-rate Digital Subscriber Line 2). The VDSL2 technology offers absolutely the fastest data transmission speed over the existing copper telephone lines without the need of rewiring.

High-performance Ethernet over VDSL2
Via the latest VDSL2 technology, PLANET VC-231G offers high-speed access to Internet, up to 190Mbps for both upstream and downstream data transmissions. With integrated support for the ITU-T’s new G.993.5 vectoring technology, the VC-231G works in conjunction with vectoring-enabled DSLAMs to remove crosstalk interference and improve maximum line bandwidth across the existing copper infrastructure.

Implementing with Existing Telephone Copper Wires
The VC-231G is also a Long Reach Ethernet (LRE) converter providing one RJ45 Ethernet port and one RJ11 phone jack, which is for VDSL2 connection. Use the additional splitter from the package of the VC-231G to share the existing phone line with POTS, thus replacing the existing copper wiring is not necessary. Just plug the VC-231G with the additional splitter into the existing RJ11 telephone jack and a high-performance VDSL2 network can be connected. It is ideal for use as an Ethernet extender to an existing Ethernet network.

Delivering High-demanding Service Connectivity for ISP/Triple Play Devices
The VC-231G provides an excellent bandwidth demand for the triple play devices for home entertainment and communication. With the asymmetric data transmission of 190/100Mbps (G.INP, Asym, 8dB), the VC-231G enables many multi-media services to work on the local Internet, such as VoD (video on demand), voice over IP, video phone, IPTV, Internet caching server, distance education, and so on. 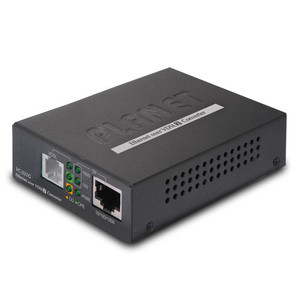